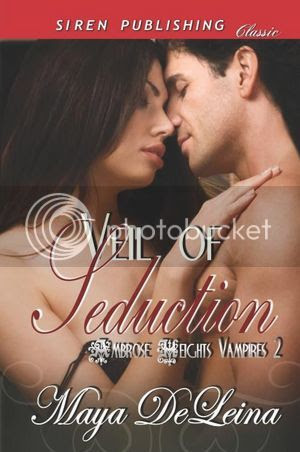 Blurb:
A newborn vampire. A powerful leader. An inconsolable woman. The shaping of their eternity all lies within the eyes.

Steffan Matthews is the devastatingly handsome vampire leader of Ambrose Heights. He cultivates social order and invents concoctions that allow vampires to feel human once again.

But Steffan also has a devouring obsession that brings him to his knees. Her name is Anya. Steffan sets out to claim Anya, a mortal ripe for the taking, as his mate. But the blackness in the eyes of his newborn should’ve served as a warning. Anya is off-limits according to the vampire creed.

It will take the strength of the kinship, the purity of love, a hint of magic, and a subterranean guardian to shield Steffan against the wrath of Ryan Evans, protect him from the fate of the Nemesis, and bridge a passage to his rightful destiny.

Tsteinerid's Review:
Veil of Seduction is an amazing addition to the Ambrose Heights Vampires series. The first book, Flesh Fantasy, was spectacular and this one is right up there with it.

Steffan is a man who believes in love and has waited his whole existence to find it. From the first shock of recognition to the moment of discovery, he was ready and willing to do anything to claim his mate.

Anya has known death. She lost her parents tragically and all she had left for family was her twin sister and her husband. First her husband leaves her, taking everything with him. Then she is informed her sister has recently died. For some unknown reason, her sister Anise has left her everything, including a rather large house in the exclusive community of Ambrose Heights. Now Anya is beginning a new life; filled with music and renewed hope.

Their passion is intense and their love is everlasting. But lurking around the corner is evil and deadly obstacles. These two lovers need to fight their enemies and vampire laws to be together. A little magic, friendship and loyalty will go a long way.

If I had to rate this novel on plot, characters and development alone, it would be a 5+ rating. The only reason it didn’t get the rating is because of editing errors. That is it.

The plot had me wanting to cheat and jump ahead just to see how it ended. I was good and didn’t cheat, but it was very tempting. I found that the characters were simply marvelous; the story was intricate and complex; and the world building was exceptional and inventive. I found myself lost in the tale. I was up until 5 am and had to force myself to go to bed, but lay awake just thinking about the story.

Veil of Seduction is a must read! It most definitely can be read alone, but I can’t help but insist you read Flesh Fantasy first. You won’t regret it!

**Disclaimer: This book has been provided to Coffee Beans & Love Scenes (“CBLS”) Reviews free of charge by the author in exchange for an honest review of this title. No money has been exchanged for this review. This review reflects the opinion of the individual reviewer and does not necessarily reflect the opinion of any other CBLS reviewer or this blog’s owner, editor or administrator.
Molly at 7:15 AM
Share